We've analyzed the 2015 NFL Schedule against 2014 defensive rankings and have prepared a tool to help you with your Fantasy Strategy for the coming season. We've ordered the teams from easiest overall schedule to most difficult overall schedule.

A few key points.
- The Tampa Bay Buccaneers have the easiest schedule, with eight total "bottom 6" defenses and zero "top 5" defenses on it's schedule. Guys like Mike Evans, Doug Martin, Vincent Jackson, and Jameis Winston are primed for solid seasons.
- Chicago plays the most difficult schedule of 2015 with five "top 5" defenses, four "top pass" defenses, and zero "bottom 6" defenses on it's schedule. The Bears may be in for a rough year.
- Seven of the Cowboys first nine games come against good matchups, followed by five of the next six against tough matchups. Look to unload Cowboys for high value midseason.
- Carolina is poised for a nice late season surge. The Panthers play eight of their final 10 games against "easy" matchups, including Atlanta twice in the fantasy football playoffs.
- The Minnesota Vikings have a rough schedule early in 2015, playing at San Francisco, home to Detroit, at Denver and at Detroit in their first six games of the season.
- The New York Giants play three tough pass defenses in the 2015 fantasy playoffs next year, which could neutralize Eli Manning, Odell Beckham Jr., Victor Cruz, and Larry Donnell in the FF playoffs.
- Tennessee has a nice run of early games, playing two "easy" matchups, followed by four straight home games.
- Miami will be spending a lot of time in the warm weather this year, playing it's last 5 games of the season at home or in San Diego. 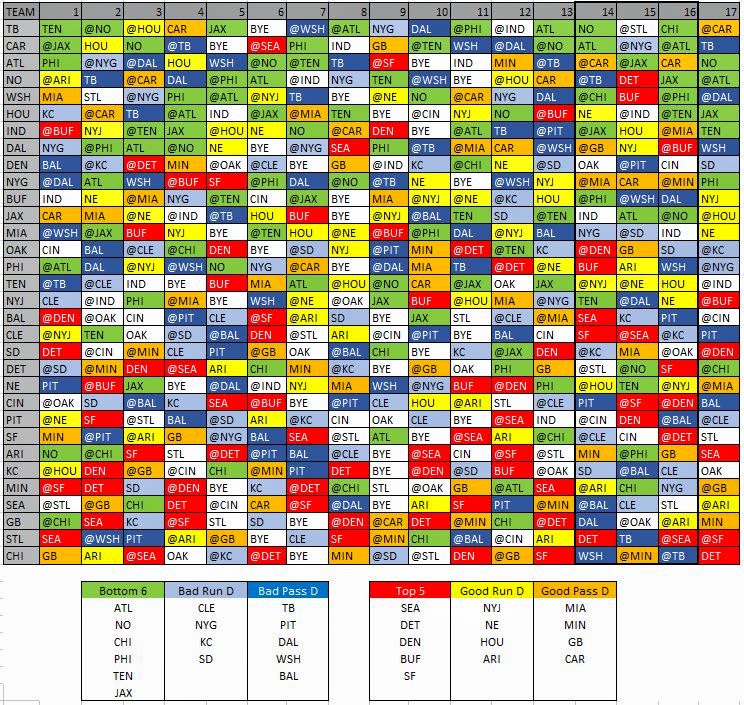