We've analyzed the 2016 NFL Schedule against 2015 defensive rankings and have prepared a tool to help you with your strategy for the coming season. Ordered from easiest overall schedule to most difficult overall schedule, the teams and their schedules are locked in. Take a look.

Notes from the editor:
- The Dallas Cowboys have the easiest overall schedule, playing five "bottom 6" teams, and six more "bad" defenses. They only have three tough match-ups all season
- New Orleans got stuck with the toughest schedule this year, playing 10 tough games, with only four weeks against "bad" defenses.
- Washington will likely get off to a fast offensive start, playing 7 easy games to start the season.
- Even though Tampa Bay has nearly the toughest overall SOS, they have excellent match-ups when the playoffs come around. Getting New Orleans twice, along with Dallas during the crucial weeks 14-16, makes the Buccaneers solid buy low candidates.
- The New York Jets have a rough schedule early in 2016, playing CIN, BUF, KC, and SEA in their first four weeks will make the early season difficult.
- It may be wise to keep your distance from the Miami offense during playoff time in 2016.  The Dolphins play three difficult matchups, of which the final tow are in the Northeast blizzard zone (NYJ and BUF).
- The New York Giants have a nice finish to the fantasy season, playing six straight "easy" defenses weeks 11-16.
- The Bears have a bitter sweet FF season ending run, playing five "bad" defenses. Of those five games, four are at home... In cold, windy, and likely snowy conditions there in Chi-town.

-  Finally, the Packers offense may get bogged down late in the FF year. Playing HOU, SEA, @CHI, and MIN in cold weather (though three are at Lambeau) weeks 13-16... Aaron Rodgers and his weapons could be solid sell high pieces midseason. 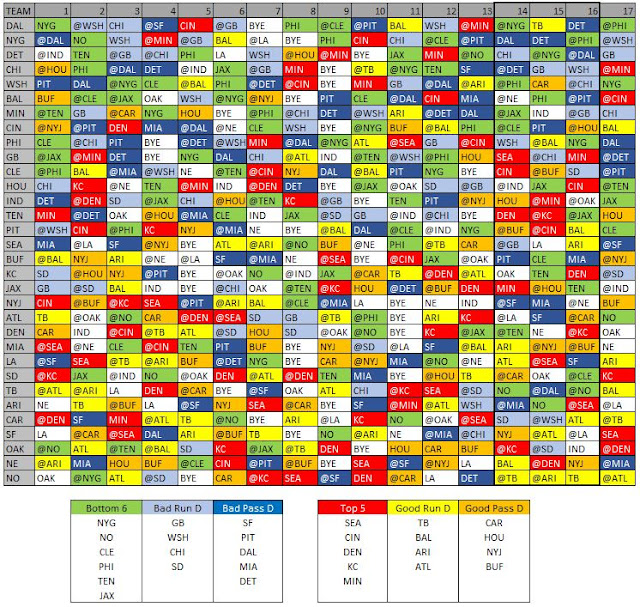