The 2017 schedule is OUT! I’ve taken a look at the entire schedule and analyzed each game against 2016 statistics. Based on this research, I was able to formulate parameters to quantify each NFL team’s Fantasy Strength of Schedule. Take a look at my findings below!

Parameters:
I use the combination below to identify PLUS and MINUS defenses based on last year’s stats. Obviously, in the offseason teams make changes, so these rankings won’t be perfect.  But most of the time, bad defenses stay bad and good defenses stay good, so these parameters will give smart fantasy owners a guideline of what teams should have a better chance to score higher fantasy points throughout the season.

Full 2017 NFL Strength of Schedule Grid
*Note: Playoffs are defined as weeks 14 through 16 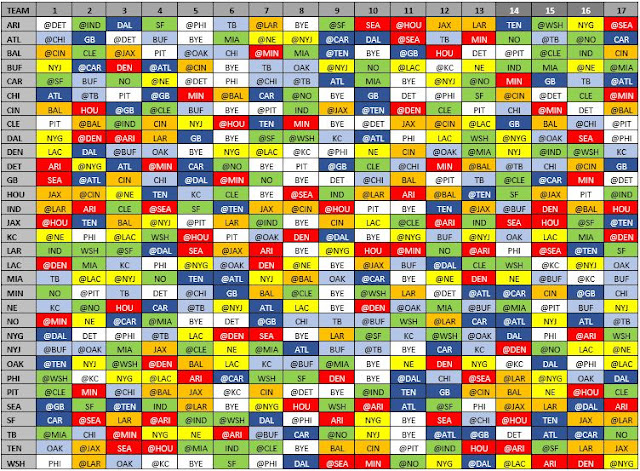 Team by Team Analysis
Arizona: Fairly easy start with four of first six against plus matchups. Very difficult weeks 10-13, as all four games are minus matchups. Plus playoff matchups with only slight weather concern in week 15.

Atlanta: Overall soft schedule with minor concerns in weeks 7, 8 and 11, all on the road against minus matchups. Playoffs are extremely favorable with New Orleans twice and no weather concerns.

Baltimore: Two of first three games are at minus matchups, but after that, not many pitfalls. Playoffs have two bottom five defenses in CLE and IND, but some weather concerns for the playoffs as all 3 games will be played outdoors in the Northeast.

Buffalo: Overall, middle of the road schedule saved by two easy playoff matchups. All late games for the Bills will all be affected by weather.

Carolina: Graded out as the easiest schedule in fantasy football. Only three minus matchups all year along with 11 plus matchups. Excellent playoff schedule. Additionally, all three of the Panthers playoff games are home.

Cincinnati: Schedule middle of the pack. Easy stretch form week 3 to week 8. At MIN in week 15 only tough playoff matchup.

Cleveland: Ouch. The Browns have the 2nd most difficult schedule in the league, including six games against tough pass defenses and weather concerns in every week of the playoffs.

Dallas: First Month will be tough, but then six of next eight games are plus matchups. Playoffs might be tough also, playing solid defenses like @NYG and SEA.

Denver: No top 5 defenses on Broncos’ schedule. They play four of last five games against plus matchups. Interesting that they will play on the road in  weeks 12, 13, 15, and 16. That’s a lot of travel.

Detroit: Three of their first four are minus matchups in 2017, but weeks 5 to 11 are favorable. Playoffs are about average.

Green Bay: Up and down schedule. Weeks 13 to 15 will be favorable, but week 16 in Green Bay against MIN may be low scoring.

Houston: Seven Houston’s of first 11 games are negative matchups. On the bright side, they get CLE, IND, and SF at home. No weather concerns for the final two months of the season.

Indianapolis: Graded out as the toughest fantasy schedule of 2017. They are scheduled to face five top 5 defenses and another five solid pass defenses. The playoffs include DEN and @BAL. Yuck.

Jacksonville: It will be a tough fantasy 2017 for the Jaguars offense, playing nine tough matchups in their first 14 games. Playoffs don’t get any better, consisting of SEA and HOU, which will be tough.

Kansas City: Middle of the road schedule with an even mix of plus and minus games. All three playoff games in are home at Arrowhead.

L.A. Rams: The Rams should start very fast, playing three bottom five defenses in a row to start the season. Then things come crashing down, as they have six straight minus matchups from week five forward. Week 15 @SEA will likely squash any playoff success for Rams players in the 2017 playoffs.

L.A. Chargers: The Chargers have some tough games early, but weeks 11 to 14 are plus matchups. The playoffs could prove difficult as the Chargers are on the road in cold weather for weeks 15 and 16.

Miami: The Dolphins have an equal amount of plus and minus games overall, but Miami gets stuck with @NE, DEN, NE, @BUF and @KC to finish the fantasy season. Not fun for Dolphin player owners who make the playoffs.

Minnesota: The Vikings have the second easiest fantasy schedule, playing zero top 5 defenses, while piling up 10 easy matchups in 2017. Look for Vikings offense to get solid production throughout this season, making Bradford a nice little sleeper option for streaming.

New England: A relatively easy schedule for Tom Brady’s gang. Look for them to roll up solid points in nearly every game with the possible exception of @DEN in week 10.

New Orleans: The Saints should have no problem hanging points up in 2017. After a pair of tough games they get 11 of their next 13 against plus defensive matchups. Atlanta’s defense twice in the fantasy playoffs should allow Brees and Co. to finish strong in the playoffs.

New York Giants: Streaky schedule for the G-men. Their first four games should be easy, followed by four tough, followed again another six easy ones. Their playoffs will be weather dependent, with weeks 14 and 15 being in New York/New Jersey.

New York Jets: Plenty of plus matchups for the Jets in 2017. Only one road game against a top defense (@DEN) which unfortunately comes up at playoff time (week 14). Everything else should be fairly manageable.

Oakland: Tough schedule for Oakland this year with multiple stretches of minus matchups up through week 13. If you get Oakland’s players to the playoffs, they should do alright as they have zero negative matchups then.

Philadelphia: They have a uniform mix of plus and minus games on the schedule. Their playoffs look tough, with @LA, @NYG, and OAK on the docket. It won’t be easy for the Eagles offense in 2017.

Pittsburgh: The Steelers fantasy studs might have it rough this season, going through a pair of four game stretches against minus matchups, including BAL, NE, and @HOU in the playoffs.

Seattle: The Seahawks will likely start out hot against their first four plus matchups to start the season, but then they’ll cool down with some tough games the rest of the way. Weather shouldn’t be a factor in the playoffs as they get to go to Florida and Texas for weeks 14 and 16 respectively.

Tampa Bay: Weeks 3 through seven will be tough for the Buccaneers, but after that, look for Jameis Winston, Mike Evan, and DeSean Jackson to step up during fantasy playoffs. Tampa’s last six games against bad pass defenses.

Tennessee: The Titans face a tough schedule in 2017. Only one sweet spot (weeks 5-7) resides on their whole schedule, so don’t expect great things from Tennessee. The playoffs aren’t any better as their matchups against ARI and SF are on the road… That’s a lot of travel for the Titans to deal with.

Washington: After a benign start to the season, Washington will face a gauntlet later on, running into seven minus matchups of their last 10 games.

Posted by Fantasy Football Evil Empire at 9:12 AM No comments: Links to this post