Can you believe the 2014 season is over? After 16 weeks of excitement and turmoil, we've got our champions. If you were one of the winners, congratulations on your success. If you were not a winner, good luck next year.  Now, let's analyze the Defensive Linemen of 2014, and rank how they did in weeks 14-16.

2) Jason Pierre-Paul had a nice bounce back year in 2014, and he killed it in the playoffs, nearly matching Watt's production.

3) Ndamukong Suh and Mario Williams had a nice playoff run.

4) Frostee Rucker was on his way to a top three playoff finish, but had a stinker in week 16.

5) After a tough week 14, Carlos Dunlap, Sealver Siliga, and Kerry Wynn put up solid numbers the rest of the way. 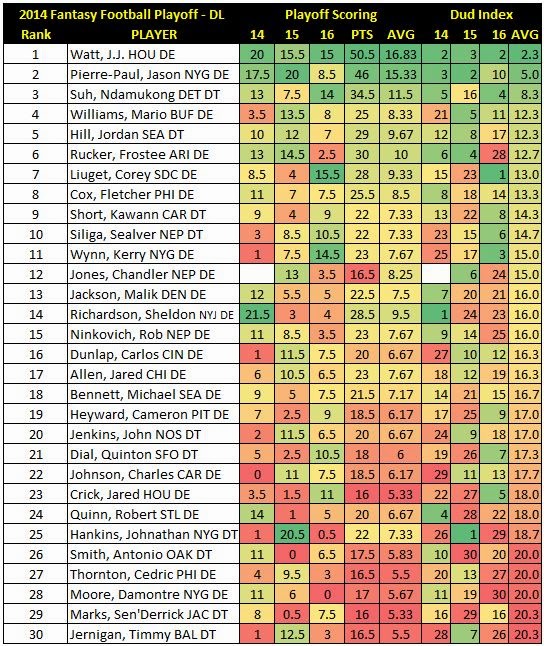 B) Aging vets like Mario Williams, DeMarcus Ware, and Chris Clemons were solid, but when will the production fall?

C) Everson Griffen could be a sell high candidate since Mike Zimmer's system does not produce major sack totals for individual DLs.

D) Sheldon Richardson, Ziggy Ansah, and Cameron Jordan all look to be on the upswing, and should be good buy targets this offseason.

Posted by Fantasy Football Evil Empire at 6:24 AM