The 2014 Fantasy Football Playoffs are upon us. Here is your guide to team schedules and which offenses will have a better chance to shine.  Green means positive match-up while red means negative.  Enjoy the next three weeks, and good luck! 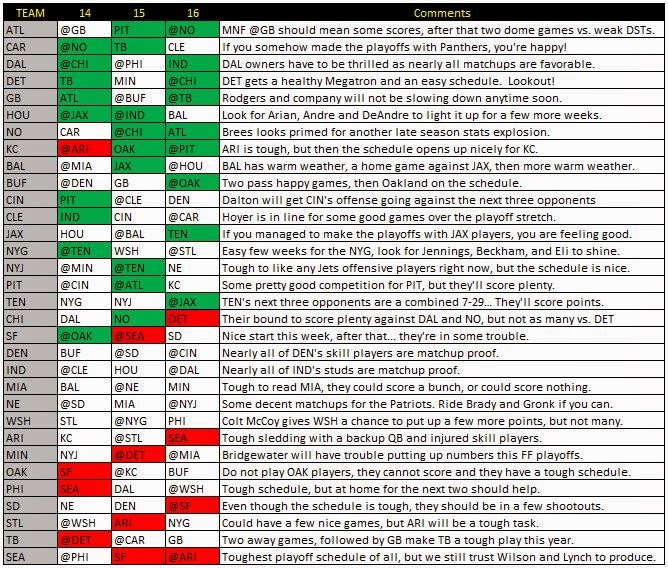 Searchable
ATL @GB PIT @NO MNF @GB should mean some scores, after that two dome games vs. weak DSTs.
CAR @NO TB CLE If you somehow made the playoffs with Panthers, you're happy!
DAL @CHI @PHI IND DAL owners have to be thrilled as nearly all matchups are favorable.
DET TB MIN @CHI DET gets a healthy Megatron and an easy schedule.  Lookout!
GB ATL @BUF @TB Rodgers and company will not be slowing down anytime soon.
HOU @JAX @IND BAL Look for Arian, Andre and DeAndre to light it up for a few more weeks.
NO CAR @CHI ATL Brees looks primed for another late season stats explosion.
KC @ARI OAK @PIT ARI is tough, but then the schedule opens up nicely for KC.
BAL @MIA JAX @HOU BAL has warm weather, a home game against JAX, then more warm weather.
BUF @DEN GB @OAK Two pass happy games, then Oakland on the schedule.
CIN PIT @CLE DEN Dalton will get CIN's offense going against the next three opponents
CLE IND CIN @CAR Hoyer is in line for some good games over the playoff stretch.
JAX HOU @BAL TEN If you managed to make the playoffs with JAX players, you are feeling good.
NYG @TEN WSH @STL Easy few weeks for the NYG, look for Jennings, Beckham, and Eli to shine.
NYJ @MIN @TEN NE Tough to like any Jets offensive players right now, but the schedule is nice.
PIT @CIN @ATL KC Some pretty good competition for PIT, but they'll score plenty.
TEN NYG NYJ @JAX TEN's next three opponents are a combined 7-29… They'll score points.
CHI DAL NO DET Their bound to score plenty against DAL and NO, but not as many vs. DET
SF @OAK @SEA SD Nice start this week, after that... they're in some trouble.
DEN BUF @SD @CIN Nearly all of DEN's skill players are matchup proof.
IND @CLE HOU @DAL Nearly all of IND's studs are matchup proof.
MIA BAL @NE MIN Tough to read MIA, they could score a bunch, or could score nothing.
NE @SD MIA @NYJ Some decent matchups for the Patriots. Ride Brady and Gronk if you can.
WSH STL @NYG PHI Colt McCoy gives WSH a chance to put up a few more points, but not many.
ARI KC @STL SEA Tough sledding with a backup QB and injured skill players.
MIN NYJ @DET @MIA Bridgewater will have trouble putting up numbers this FF playoffs.
OAK SF @KC BUF Do not play OAK players, they cannot score and they have a tough schedule.
PHI SEA DAL @WSH Tough schedule, but at home for the next two should help.
SD NE DEN @SF Even though the schedule is tough, they should be in a few shootouts.
STL @WSH ARI NYG Could have a few nice games, but ARI will be a tough task.
TB @DET @CAR GB Two away games, followed by GB make TB a tough play this year.
SEA @PHI SF @ARI Toughest playoff schedule of all, but we still trust Wilson and Lynch to produce.

Posted by Fantasy Football Evil Empire at 11:23 AM