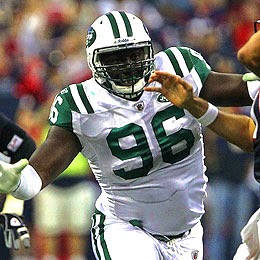 Overall Outlook
The New York Jets cut ties with Mark Sanchez in favor of Geno Smith in 2013, forcing the Jets, and the rookie QB, to go through some major growing pains. The 2013 Jets scored only 25 total touchdowns and turned the ball over 29 times.  In 2014, Smith will have a few more weapons at his disposal, including free agent pickups Chris Johnson, Eric Decker and Jacoby Ford.  With all the additions, we still see the Jets toiling around .500, but being more consistent on offense. Look for some close games out of this bunch this NFL season.
Offensive Outlook
The Jets offense ranked sixth in the league in rushing in 2013, unfortunately, the team was 31st in the league in passing as well. So, the Jets went out and signed Chris Johnson, Eric Decker and Jacoby Ford to help improve their lack of explosiveness. This, along with Michael Vick and Geno Smith working the QB, position, creates some interesting sleeper options in New York. We see improvement in the offense that could help a fantasy team some weeks, but nothing that will take your FF squad to the top.
Defensive Outlook


The New York defense has been a strength of the Jets organization since Rex Ryan became head coach. However, last year the tea struggled in this department, ranking 22nd in yards allowed, and 14th in points allowed.  The team was put into touch positions by it's rookie QB last year, so we do expect some improvement there, but with Dee Milliner and Calvin Pryor being very young, we still expect some growing pains in 2014.